The History of Wandsworth Common 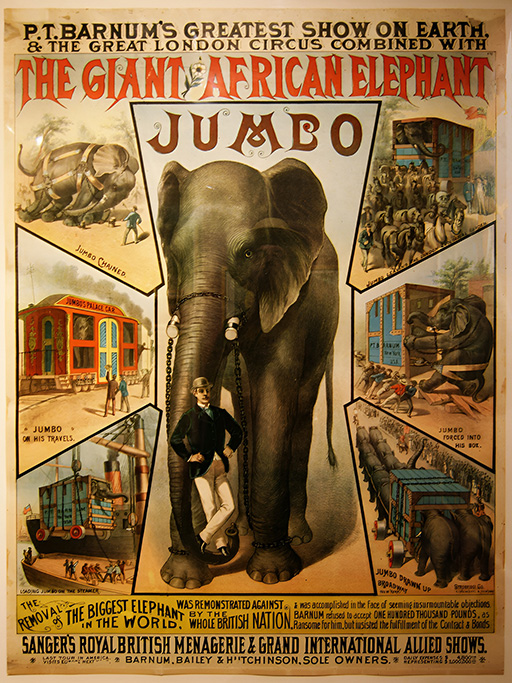 — Nurseryman Robert Neal appeals to "Noblemen and Gentlemen" to buy his plants, to make way for the Toast Rack . . .

— Treasure-hunters dig up the turf on the Common . . .

Lots of new stories for the new year, including a macabre tale of body-snatching from 1823: "For the last ten days the town of Wandsworth has been in utter confusion, in consequence of four dead bodies have been disinterred from the burial-ground... "

My longest meander over the Common this month takes in Jumbo the elephant, lost cats, rabbits, "rabbits" that may in fact be cats, and some (very) juvenile gaolbirds. Plus Robert Inwood, the early Victorian "pedestrian" whose athletic triumphs started on the Common.

The original "Jumbo" was never (so far as I know) lost on Wandsworth Common. He was an elephant, said to be "the biggest in the world". He was so universally famous in the 1880s that his name was soon attached to anything huge, and this has stuck.

Our lost Jumbo was a "large black tom-cat... with two white whiskers".

"P.T. Barnum's Greatest Show on Earth — The Removal of the Biggest Elephant in the World was remonstrated against by the whole British nation."

In spite of intense public outrage, the giant African elephant Jumbo was removed from the London Zoological Garden. He was chained, forced into a box, and transported by steamer to New York. On arrival he was pulled and pushed by a team of twelve or so elephants down Broadway.

The scenes — vividly drawn around the edge of the poster — are worth examining more closely. Reminiscent of Disney's 1941 animation Dumbo, eh?

But let's get back to our missing Jumbo-the-Wandsworth-Common-cat... 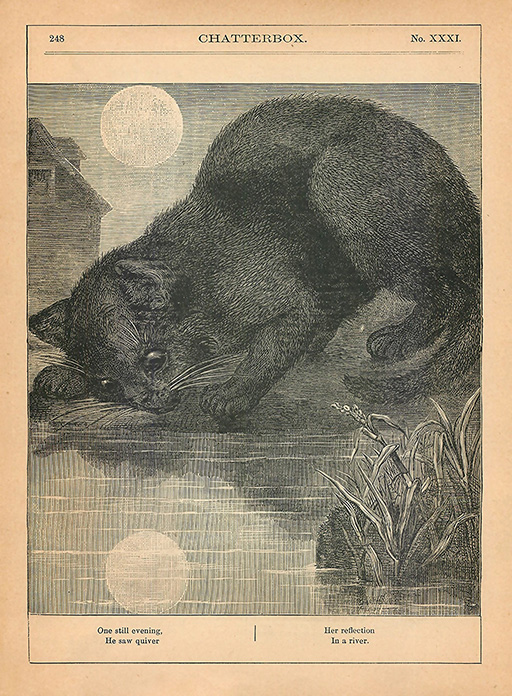 John Erskine Clarke, the supremely energetic former vicar of St Mary's Battersea, had by this time built a new church for himself — St Luke's on the corner of Ramsden Road and Thurleigh Road. His children's magazine Chatterbox — a weekly paper later repackaged as annuals — ran for more than eighty years (including in the USA) (1866—1948). Images and stories of animals (and the natural world more generally) abound, almost always with a moral. 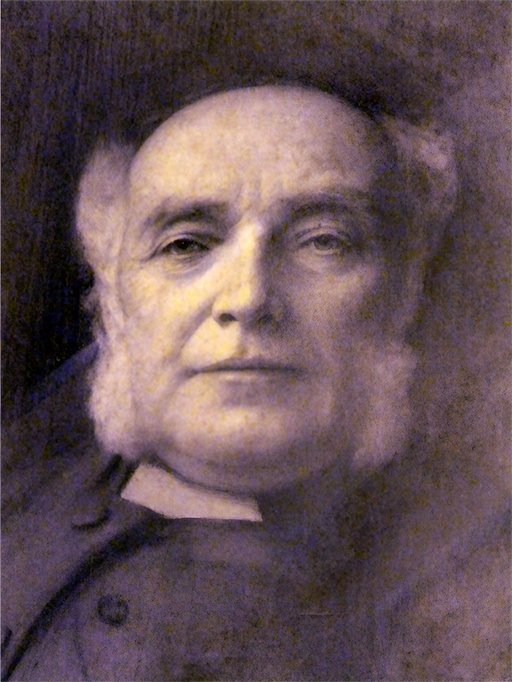 "Disconsolate One," writing from Wandsworth Common, wishes me to make the fact known the South London world that on the evening of Saturday, 30th December last, a large black tom-cat, answering to the name of "Jumbo," disappeared from his home, and has not since been heard of.

"Jumbo" was not the only household god which went astray last year; and as some time has elapsed since the sad event took place, I am really afraid he has gone the way of all cats. An inquiry down Bermondsey way might possibly not be altogether profitless, for they have a habit there of describing feline pets as Ostend rabbits!

Or, perchance, the interesting animal may yet be found in one of the many mews round Wandsworth Common.

"Jumbo" will easily be recognized, according to the owner, by the fact that he has "two white whiskers." Now, this should bring about his identification forthwith; for whoever yet saw a cat with "two white whiskers?" Truly a marvellous whiskerus naturae!

I was curious about the phrase.

From the 1840s onwards, it turned out, skinned rabbits were imported in immense numbers from Ostend to the London docks (hence the Bermondsey reference). Above all, they were cheap, so they became a mainstay of poor London's diet.

The fact that Ostend rabbits could be shipped across the Channel in such numbers and still make a profit seemed a mystery. They were ready-skinned, so might have looked like just about any small mammal. Surely many must have been cats? Well, that was the widely told joke.

The reality is that rabbit-production was extraordinarily well-organised in Belgium. In the main, it was the children in families that reared a small number of rabbits to contribute to family income. The rabbits were bought by travelling middle-men and then processed on a massive scale.

The fur was a major element of the economics — it could be spun into wool, or the skins used to make warm coats, hats or clothing trims, or dyed and treated to simulate more expensive furs. 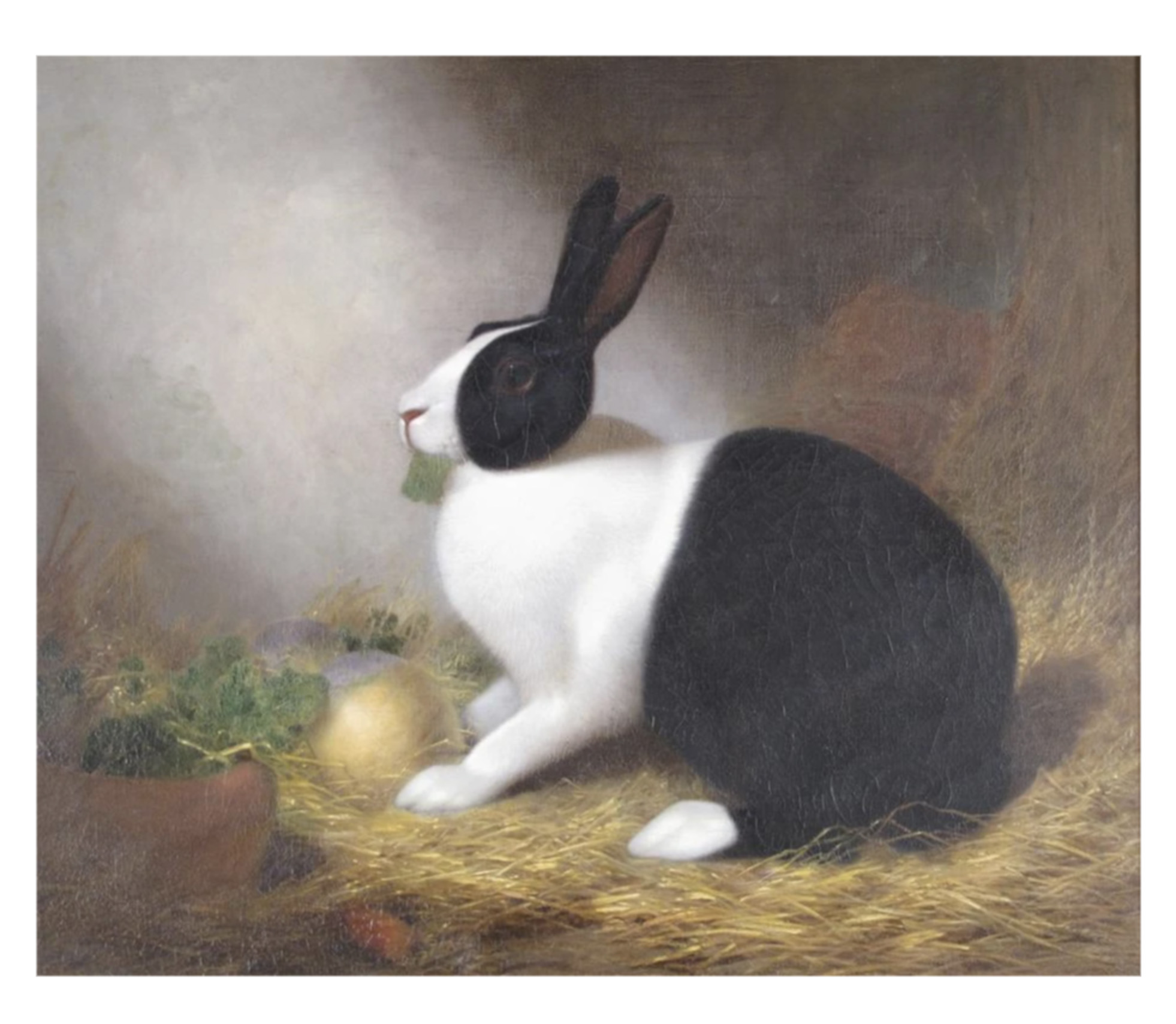 The giant Brabancon rabbits specially bred for meat are now said to be extinct. But a smaller descendant, the Dutch Rabbit, is still a popular pet.

[All is explained here — TheLowCountries.com: When Flemish rabbits fed the poor of London and Wikipedia: Cuniculture.]

There were risks — in October 1871, Dr Kempster reported to the Wandsworth Board of Works that in the previous month in Battersea East, "2 cwt of ostend rabbits were condemned by the medical officer on October 17." Two hundredweight is more than a hundred kilos.

But partly thanks to Kepmster and other attentive public health officers, rabbit moved into middle class menus. Here is our local hero John Buckmaster's recipe for Brown Fricasse Rabbit: 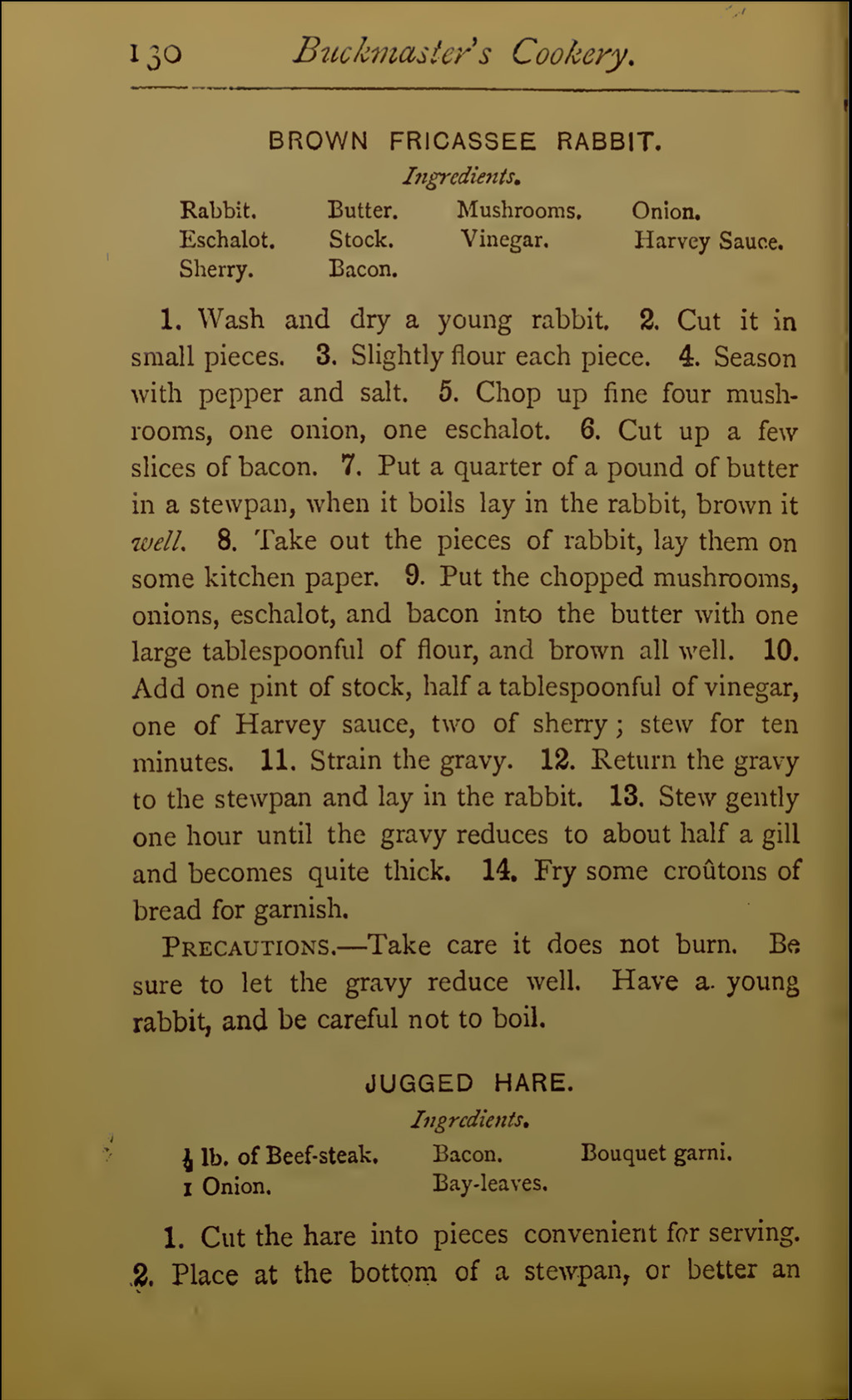 Recipe for Brown Fricassee Rabbit, from Buckmaster's Cookery, 1887. A similar recipe had appeared in earlier editions of this pioneering work, along with other rabbit dishes (Curried Rabbit, Stewed Rabbit).

If any reader of these Chronicles is interested in the history of cooking and diet, do please get in touch. It would be very interesting to look at John Buckmaster's work more closely — and to try some of his recipes!

And while we're on the subject of bunnies and the London poor, here is a photograph of Prisoner 4100 taken at almost this exact day 150 years ago in Wandsworth Prison. His name is George Davey, and he was sentenced to one month's hard labour for stealing two rabbits. He was ten years old. 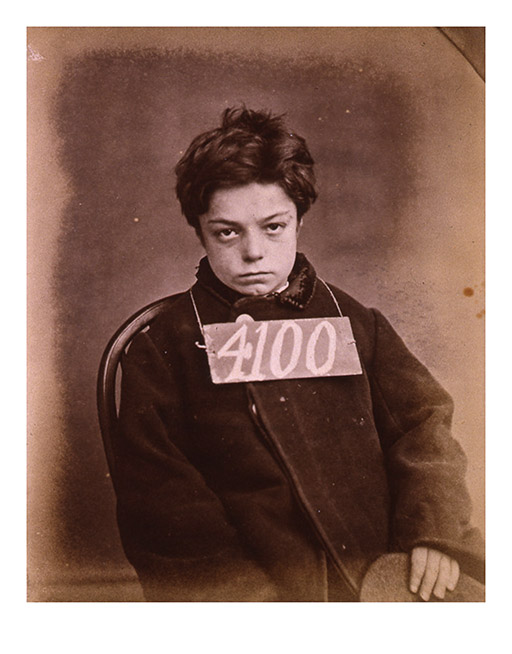 I took a quick virtual trip to the British Newspaper Archive and found George Davey in the Surrey Comet, Saturday 21 December 1872, with a reference to an older accomplice, 12-year-old William Towner: 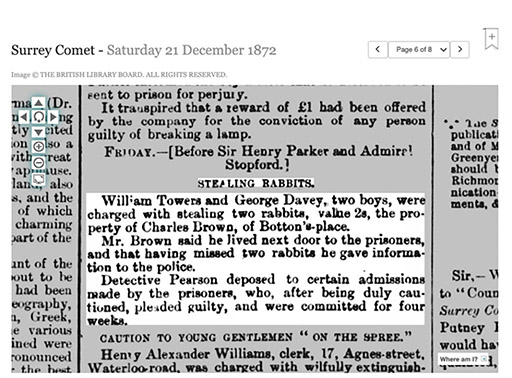 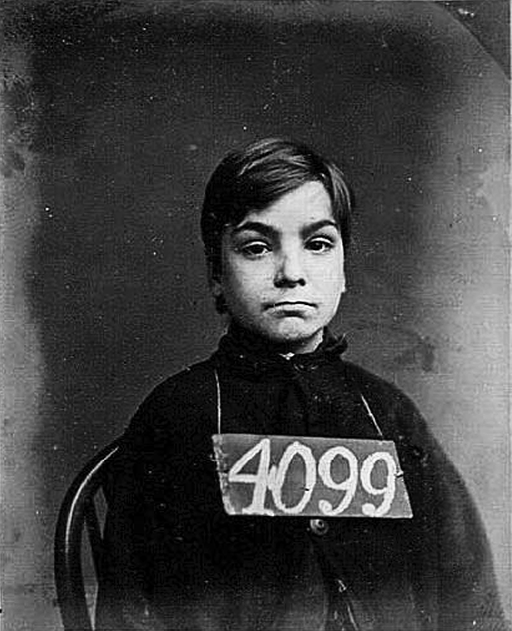 And this in turn led me to a very interesting presentation, Prisoner 4099, created for the National Archive: 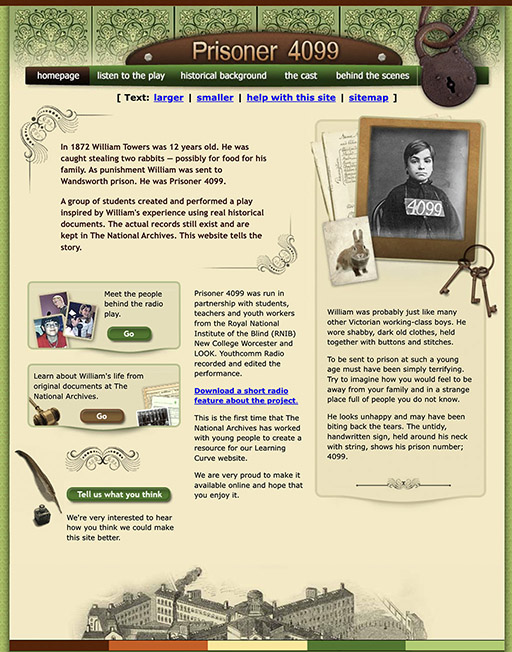 The Home Page for Prisoner 4099, an educational resource created for the National Archive. The story focuses on the life and times of William Towner, and demonstrates how NA sources can be used to build a detailed and vivid picture of life in the nineteenth-century.

In case you missed the stories in last March's Chronicles, here are some images relating to rabbit (and hare) coursing on the Common: 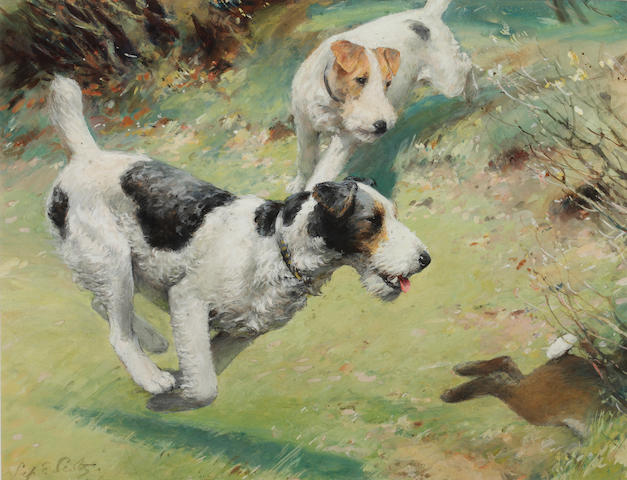 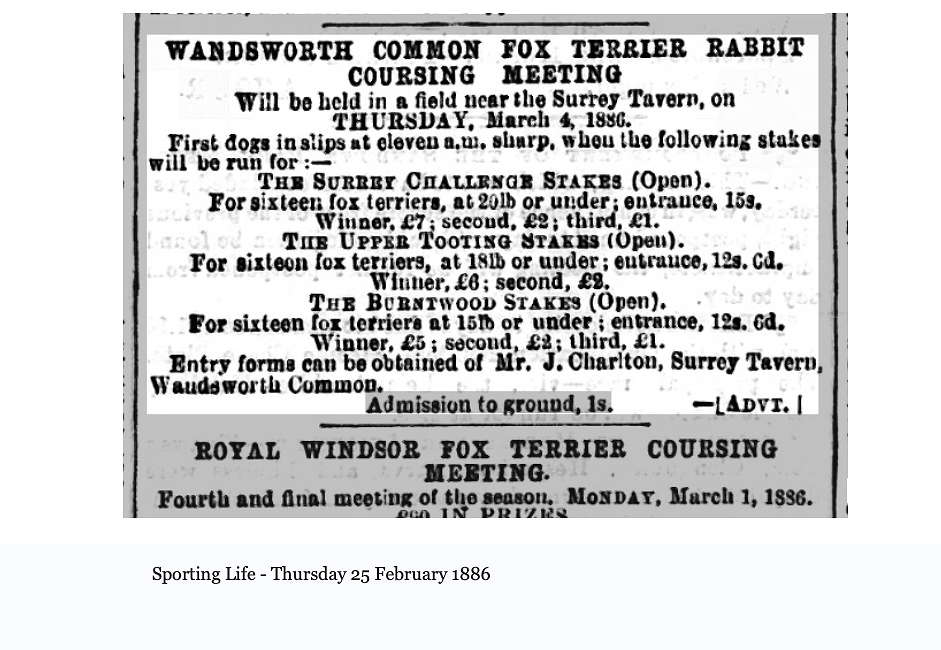 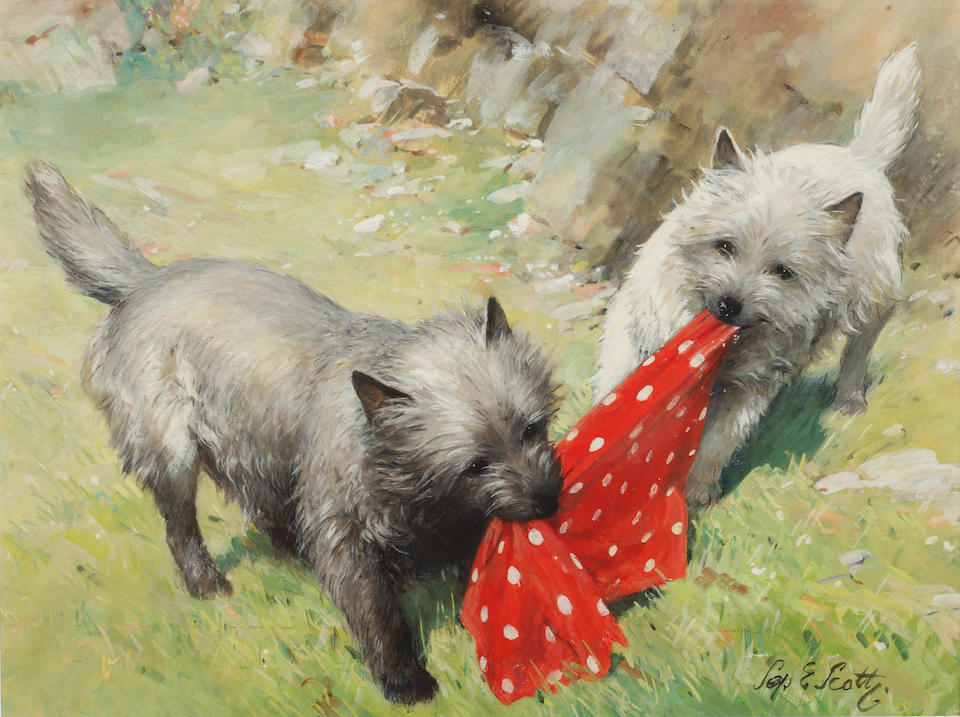 You can read more stories about Wandsworth Common and terrier coursing in the Chronicles for March 2022. And the birth of Beatrix Potter's Peter Rabbit in August 2022.

Yes, but what happened to our missing Jumbo (the cat)?

Unusually for my missing-pets stories, in this case there is a happy ending.

There was jubilation when Jumbo (the cat) was found, as is recorded in the South London Press a week or two later. (But notice also the grizzly witticisms about cats as food in Bermondsey.)

I am pleased to inform you that Jumbo has returned — not the late elephantine favourite of the Zoological Gardens, but the lost feline pet of the "disconsolate one" of Wandsworth Common.

After many roving days, Jumbo is home again, looking much "leaner" after his ramble, his two remarkable white whiskers establishing beyond a doubt his identity. His owner breathes with relief now that he knows he will not have to contemplate the dreadful possibility of Jumbo appearing on the table of a Bermondseyite, in company with a piece of his porcine relation the pig, and to know that the dish will not be wrongly called "Pork and Ostend rabbit."

But not just food for a "Bermondseyite". Rabbit soon took its place on middle-class menus too. 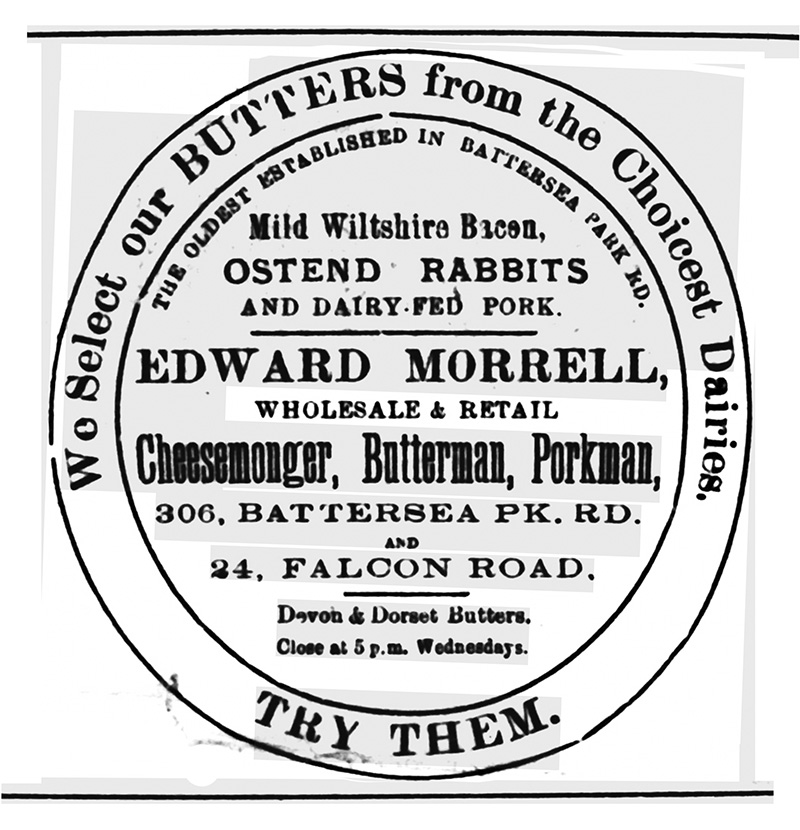 When the Circus came to the Common...

I was asked recently whether I recall any circuses on the Common in the 1950s. I certainly remember going to the circus several times, and "wild" animals were always a big part of the show, but was that on the Common? I just don't know.

Advert in the South Western Star for Chipperfield's Circus, 6 August 1954

Local historian and archivist Cathie Rowntree says a friend of hers remembers a visit to a circus sited in the Frying Pan, but all Cathy herself can recall is a row of elephants linked trunk-to-tail processing along East Hill. How wonderful! 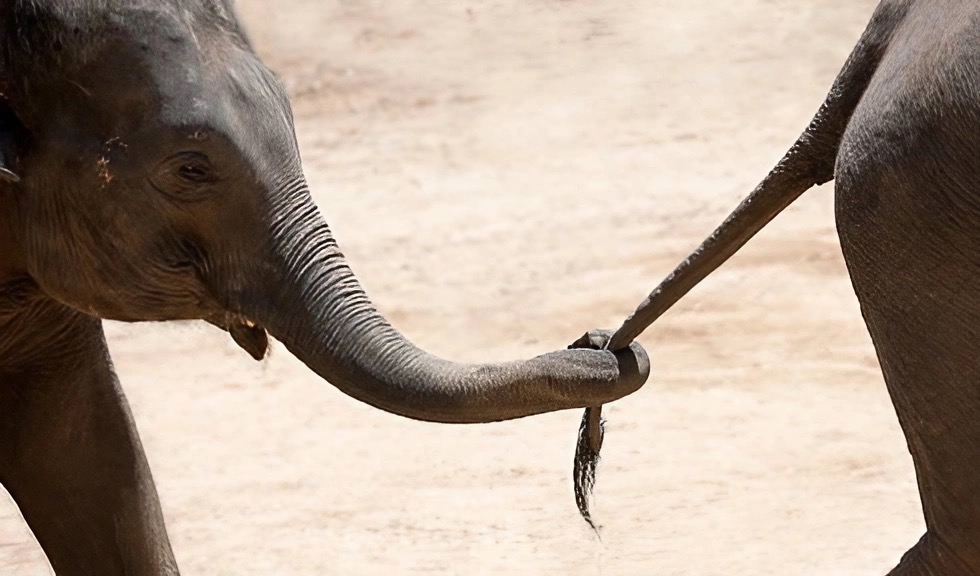